I remember the day I got my first Vogel-Cut® crystal wand. It was in the fall of 2006 and we were headed for our Casa de Angeles. The Casa is a mountain retreat in the Lincoln Forest of New Mexico. My new crystal friend was an Angel Cut crystal, which is not considered a true Vogel crystal because the type of cut was not invented until after Marcel Vogel’s death. The Angel Cut was invented by a Vogel-trained cutter and remains a key element of my arsenal for working in the healing arts.

Not having a large interest in crystals for most of my life, this was a new discovery for me and my curiosity was peaking with everything I had consumed regarding crystals and their healing power. It certainly was an amazing piece of art, and hard to believe that it was hand cut and polished. The crisp lines, the sixteen facets, the clarity of the electronics grade quartz crystal, had me in amazement of the superior craftsmanship. My crystal came with an inclusion toward the top of the female side. Possibly taking a million years to develop, there was a clear image of angel wings in the crystal. 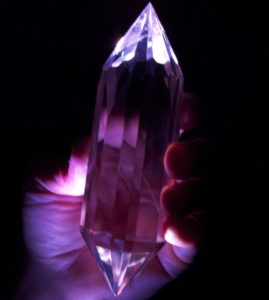 Years later I was able to get some professional images of that inclusion, and the person who sold me the crystal saw the photo image. He said he wished he had never sold that crystal (lol). Now ten years later, that crystal has doubled in value, making Vogel crystal wands a great investment. One source has told me that electronics grade crystals (optically clear) are becoming harder and harder to find, which seems a little counterintuitive, but I do believe this expert is correct.

With the purchase of the crystal, came two videos of Dr. Marcel Vogel demonstrating his crystal release method and describing the healing properties of crystals from the standpoint of a scientist. As I watched the videos and marveled at the crystal, Beckie was stepping into the shower. She walked past me and asked when I thought I would be ready to try a crystal release. I told her in about fifteen minutes, with sly grin pointed directly at her wide eyes (lol).

While she was in the shower, I programmed a crystal for the first time and what happened was the first real evidence to me. The crystal formed water on the outer skin as I began to program it with my intentions, which was the physical manifestation described by Marcel Vogel in the video. I was more than a little stunned and when Beckie emerged from her shower, I performed my first crystal release. It was amazing and a little scary, due to the profound effects it had on her. Neither one of us was expecting anything, but a cellular change not only occurred in that moment, the shift was permanent.

In the time since, I have done thousands of crystal releases on myself and others, with incredible results. I have to say it is one of the most powerful healing tools I have ever witnessed. I have seen a 6-foot, 6-inch tall man collapse on the floor in the fetal position and cry uncontrollably. I have seen people go through their awakening. I have witnessed two people that passed out from the intensity. For these reasons and more, I use the crystal release under the strongest discernment and guidance as possible, and I use it sparingly due to the power of these amazing energy devices.

As I grew to learn more about crystals, I discovered that raw crystals are programmed by the earth for delivering balancing energy to the plants, the trees, the water, and the animals. So it would stand to reason, raw crystals deliver energy at a much lower rate. They can be used to create subtle changes, but the Vogel-Cut® and Vogel Style crystals are much more powerful. 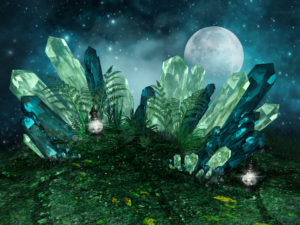 These amazing devices will walk around the Earth to find their keeper, and I have discovered that people simply do not turn loose of their Vogel crystal. It is incredibly hard to find a used Vogel and when you do, they are usually sound asleep, forced into a slumber by being held in the darkness of a closet, a drawer, or a storage unit. If they are not meant to be with their owner, they will find a way to escape or break. In my experience of handling crystals, I have only experienced one crystal break in 11 years, and that was more than a shocking event when it occurred during an intense crystal workshop demonstration.

At Crystal Light and Sound, our online store, we will not sell a crystal unless it communicates a match to the purchaser. It can be challenging to turn down a big sale, but that’s the only way it works. I have learned that not all crystals want to be in service for healing, but that aspect is usually determined by the gifted lapidary artists that we work with, prior to making their first cut. The IEL Institute for the Spiritual Arts 3.1 Crystal Therapy bundle is one of my greatest pleasures to share with others who hold passion around using crystals for healing, whether with themselves or others.

Click here to see the full description of the 3.1 Crystal Therapy online course

Gain immediate access to this training and our entire training curriculum!
Curated content for members only, forums, and
joining a community of like-minded individuals.